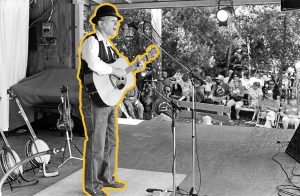 John Hartford was an American original – a musician, songwriter, steamboat pilot, author, artist, disc jockey, calligrapher, dancer, folklorist, father, and historian. He wrote one of the most popular songs of all time, Gentle On My Mind and was a regular guest and contributor on the Glen Campbell Good Time Hour and the Smothers Brothers Show. He added music and narration to Ken Burns’ landmark Civil War series, and was an integral part of the hugely popular “O Brother, Where Art Thou?” soundtrack and Down From The Mountain concert tour.

At an early age, John fell in love with two things: music and the Mississippi River – passions that would last his lifetime, and their pursuit would be his life’s passage.

John Hartford became mentor and mystic for a generation of pickers, singers, and songwriters. His landmark record, Aereo-plain (1971) documented his work with Vassar Clements, Norman Blake, and Tut Taylor. Rooted firmly in tradition but sprouting at the top with hippie hair, the group’s instrumental mastery and free-wheeling style bridged a musical gap between traditional bluegrass and a progressive new audience, making every song a cult favorite and every live performance the thing of legend. According to Sam Bush, “Without Aereo-plain, there would be no ‘newgrass’ music.”

Archival John Hartford recordings have been added to the Sunday lineup that include: selections from the Gospel Hour, Dewey Balfa, Na Caberfeidh-Rare Air, WheatSongs (new songs by Wheatland writers), the “Carry It On” video, Tim & Mollie O’Brien with Jerry Douglas, and Irish band Lúnasa.

Wear "Wheatland Worldwide"-ware!
Save-the-Dates - From Remus to Your Backyard!