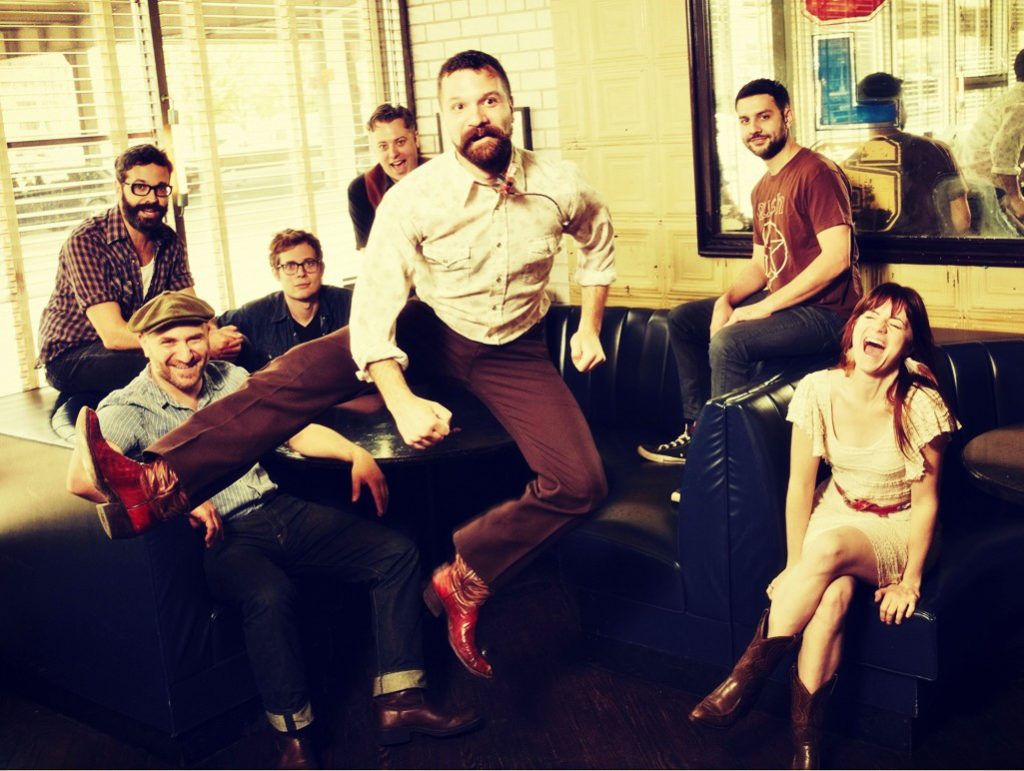 Described as everything from “Hee-Haw on mescaline” to “Carter Family-meets-Ramones”, The Defibulators unique brand of country has made them pioneers in the Brooklyn country music scene.

The band is currently touring on the heels of their latest LP release, Debt’ll Get’em. Co-produced with Brian Bender (Langhorne Slim, Jose James). The album is a striking, au courant take on classic country, channeling the frenetic energy of their legendary live shows into tight, punchy hooks and foot-stomping sing-alongs.

From “Pay For That Money,” a pedal steel and fiddle lament about debt, to “Let Me See That Ponytail Run,” a dreamy ode to beauty just out of reach, the album is full of gorgeous harmonies and razor-sharp wit. “Everybody’s Got a Banjo” is a biting, swamp funk-inspired nod to the instrument’s recent ubiquity (“If you don’t know how to play it, well it still looks cool”), and “Cackalacky” is the tongue-in-cheek story of an Appalachian musician who moves to New York City to make it big in roots music.

The band’s infectious energy and originality earned them a nod as one of Brooklyn’s best emerging bands in VICE Magazine, and a devoted following in a city not known for its love of country. “It’s fun to play for people who don’t think they like country music,” says singer Erin Bru. Guitarist/singer/songwriter Bug Jennings agrees, adding, “There’s something about the fast-paced, frantic, neurotic energy of New York that fuels our sound.”

Their debut album Corn Money garnered immediate critical notice from Buzzfeed to CMT, with New York Magazine raving that “[Bug] and singer Erin Bru slip into harmonies that recall the storied Gram Parsons-Emmylou Harris duets,” Under the Radar hailed it as “a boozy concoction worth swigging until last call,” and PopMatters describing it as “a drunken square dance on speed.”

Call it what you will, Americana, indie honky-tonk, truckerpunk, or Brooklyn Country, the proof is in the listening. There is a unique familiarity that percolates throughout Debt’ll Get ‘Em. The reverence for traditional country forms combined with an irreverent rock and roll attitude is a trademark of the Defibs sound. Gear-grinding twang and sawing fiddles saturate songs rooted in the debt-laden and downtrodden, the moods swinging between satirical and sentimental, with unpredictable outbursts into total country chaos.

When not on the road together, The Defibulators reside in individual, non-mobile homes in Hoboken, Harlem, and Brooklyn.
The Defibulators’ Songbook has been published by Mel Bay Publications.

A blistering, let’s-get-down-to-the-truth, eclectic mix of musical styles that push and stretch the boundaries of country music.NO DEPRESSION
Brooklyn’s kings of alt-country; just minus the ‘alt.’VICE
Rowdy, punk-fueled twang highlighted by heaps of blue-collar wit.THE WASHINGTON POST
The perfect soundtrack for a family picnic, or a meth lab.TWANG NATION