A PLACE FOR DRUM, DANCE AND ACOUSTIC PERFORMANCE 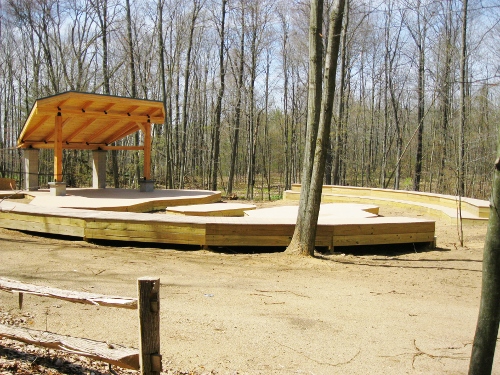 The building of the Rhythm Stage is now complete!

The North American Rhythmaculture is alive and well. It has been part of our artistic landscape since the Native Americans ran the show, and even through colonization (definitely dipped there) and the slave trade, to the blues and jazz. Rock and roll, hip hop and whatever it is that my daughter listens to now are all forms of drum and dance – the messenger (and message) might be transforming, but the beat has always been there. I mean, really – the banjo is a drum. The “blue notes” are totally West African. And here we are, a nearly 40 year tradition of music and dance in the great state of Michigan. Our people are funky…..some of us dig the fiddle, and some of us dig the drum. A lot of us dig it all.

The site will serve as an alternative venue for main stage performers to offer an intimate acoustic performance in the forest, as well as a venue for drum classes. Combining a workshop space with a stage for music and dance performance allows WMO to greatly expand its lineup of facilities in one gesture. As well, the proposed venue will be an official place to support and foster a positive environment for drum classes and open drum jams. WMO feels that an official venue for the purpose of drumming will nurture and encourage a healthy Wheatland drum milieu. This mixed-use space will be a pleasant counterpoint in the forest to the festival’s other stages, and give the Rhythmaculture in Michigan a flagship home. 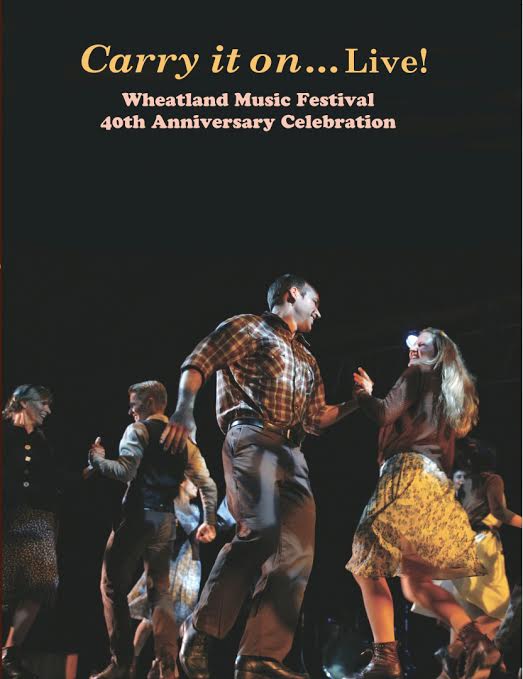 Carry it on… Traditional Artists Recognized

Michigan State University’s Museum Michigan Traditional Arts Program has awarded several Carry it on… participants in the Michigan Traditional Arts Apprenticeship Program. The program supports the continuation of traditional folk arts practiced in Michigan that are learned informally from one another in small groups and families — ranging from decoy duck carving and birch bark canoe making to storytelling, mehendi (henna) art application, and regional and ethnic foodways. A master artist works with an apprentice artist in the same community, passing on the skills and knowledge about a particular traditional art.

The Michigan State University Museum’s Michigan Traditional Arts Program (MTAP), develops and implements programs “to advance cross-cultural understanding in a diverse society through the identification, documentation, preservation, and presentation of the traditional arts and cultural heritage of the state of Michigan.” The activities of the Folk Arts Division to promote awareness, appreciation, and support for Michigan’s traditional cultural resources through research, education, and public service are now coordinated under MTAP.

For more information, or to explore applying next year see http://museum.msu.edu/s-program/mtap/AboutMTAP/ 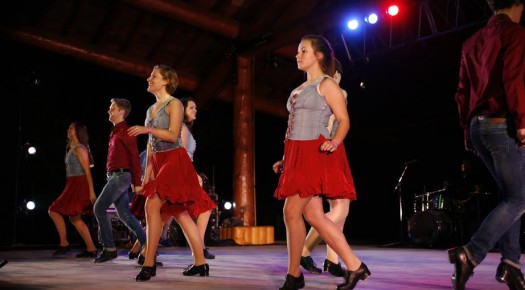 A new documentary film featuring the Carry it on…  project of performances filmed during Wheatland Music Organization’s 40th anniversary 2013 festival in Remus, Michigan is now available!

Wheatland Music Organization, a nonprofit organization dedicated to the preservation and presentation of traditional arts, commissioned the former directors of the Rhythm In Shoes dance and music company to create the multi-media Carry it on… project.  The performances and workshops incorporated four generations and more than 70 dancers across Michigan as well as 20 professional percussive dancers and musicians from across the country. The dance on film involved an additional 10 artists.

Carry it on… was directed by renowned artist and dancer Sharon Leahy with original music composed by Rick Good from the Rhythm In Shoes company of Spring Valley, Ohio.  Both are well known and abundant creators as dancers, musicians, actors, writers, educators and advocates of America’s musical roots. Wheatland Music has enjoyed a long, fruitful and trusting relationship with the duo that dates back to 1977.

Project development work began in 2012.  During 2013 there were multiple residency trainings (nineteen visits at six different sites across the State of Michigan), a mentorship and newly choreographed work, new compositions, a dance on film and workshops for the public at Wheatland’s Gladys Wernette Classroom Building and during the 25th annual Traditional Arts Weekend held in May.  Both children and adults took part in the trainings that benefited 12 Ann Arbor area dancers, 8 Lansing area dancers, 32 Mt. Pleasant and Alma dancers, 9 northwest Michigan dancers, 10 Remus area dancers and hundreds of participants that attended workshops.   Dances were choreographed by Sharon Leahy, Becky Hill, Abby Ladin, Heidi Whitfield and Emma Young and new music composed by Rick Good and Sam Bartlett.

The Carry it on… project was supported by Wheatland Music Organization along with funding from the Michigan Council for Arts and Cultural Affairs (MCACA), The National Endowment for the Arts (NEA), the Country Dance and Song Society (CDSS) and gifts by 40th Anniversary family, business and organization supporters.

The “collectors edition” DVD called Carry it on…Live!   with an educational booklet will be available for purchase for $20 (includes shipping/handling) ordered from the Wheatland online store or purchased at the Performers Recordings  booth at the 41st annual Wheatland Music festival September 5-7th, 2014.

The Dance on Camera film, Carry it on… that premiered at Wheatland’s 40th anniversary festival, has entered the world of film festivals.  It has, to date, been screened at the 2014 International Screen Dance Festival in Durham, NC by theAmerican Dance Festival (ADF), at the 2014 Dance on Camera Festival co-presented by the Film Society of Lincoln Centerand Dance Films Association in New York City, the Vermillionville Film Series in Lafayette, Louisiana, the Dance on Screen Festival at the University of Michigan in Ann Arbor, and the San Francisco Dance Film Festival in California. 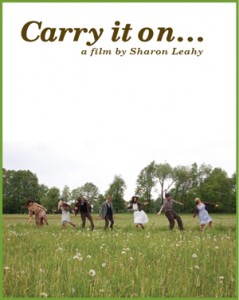 Carry it on… a film by Sharon Leahy

A Dance for Camera created, performed and shot on site at the Wernette Family Farm outside of Remus, Michigan, home to the Wheatland Music Festival for the past 40 years, the film focuses on the sacred power and potential of place and our relationship to it.  Moving through, with and around open fields, a pine grove and an old stage, the cast of dancers and musicians explores humankind’s relationship to our environment and our universal need to gather.

Because 2013 is the 40th anniversary of the Wheatland Music festival and the 25th year of Traditional Arts Weekend, multiple ways to commemorate the year are being planned.  A new 40 year Anniversary Book called Passages II is in development along with a production called Carry it on... involving more than 50 Michigan youth and adults as well as many artists from past years.

Click on the photo to watch the Carry it on… Dance for Film Trailer.  Film available soon for purchase. 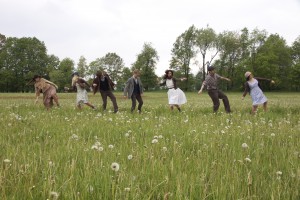 A Saturday night dance performance on the main stage at Wheatland has been a highlight of many a September Festival.  It generates excitement like nothing else, and so it is fitting that the centerpiece of our 40th Anniversary Festival Celebration will feature the finest professional dancers in the country.

Having been commissioned by the Wheatland Music Organization, Inc. (WMO) to creat this performance, former Rhythm in Shoes director, Sharon Leahy has assembled a Who’s Who of hoofers from Wheatland’s past to perform in the Carry it on… Project.  Dancers Ira Bernstein, Christine Galante, Nic Gareiss, Matt Gordon, Becky Hill, Abby Ladin, Matt Olwell, Rodney Sutton, Zane Terry, Heidi (Kulas) Whitfield and Emma Young will carry on Wheatland’s long-standing tradition of presenting the best in traditional dance.  Having graced the stage with the country’s finest step dance ensembles–the Green Grass Cloggers, the Fiddle Puppets, Shuffle Creek Dancers, Footnotes, Footworks, Good Foot and Rhythm in Shoes–these dancers will be no strangers to our Festival crowd.  Joining them will be over 65 of Michigan’s finest percussive dancers, ages 12-62, a string quartet and the finest dance band in all the land–Rick Good, Cleek Schrey, Sam Bartlett, Ben Cooper, Kevin Anderson and Tom T Ball.

It is sure to be a delight. 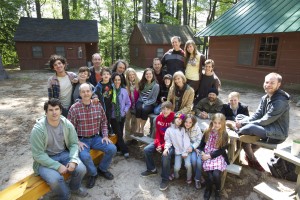 A sure to be amazing and special performance during the festival on Main Stage Saturday night is the culmination of a yearlong project called Carry it on… It incorporates four generations and more than 70 dancers across Michigan as well as 23 professional percussive dancers and musicians from across the country!

In celebration of the 40th anniversary, Wheatland Music Organization commissioned the former directors of the Rhythm in Shoes dance and music company to create Carry it on…  The project is the innovation of, and being directed by, renowned artist and dancer Sharon Leahy.  Original music has been composed by Rick Good.  Both are well known and abundant creators as dancers, musicians, actors, writers, educators and advocates of America’s musical roots. Wheatland Music has a long, fruitful and trusting relationship with the duo that dates back to 1977.

Over the last year the project has included multiple residency trainings (19 visits to 6 different sites across Michigan) for children and adults dancers.  Twelve dancers received training in the Ann Arbor area, 8 in the Lansing area, 32 in Mt. Pleasant and Alma, 9 in northwest Michigan and 10 in Remus. In addition, the project included dance instruction for the public.  Ten people received instruction at Wheatland’s Gladys Wernette Classroom Building and twelve different dance style workshops were taught at the 25th annual Traditional Arts Weekend held in May reaching 232 dancers. 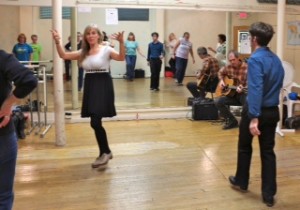 Sharon Leahy leading a dance training at the Academy of Performing Arts in Alma, MI.
Photo by Nic Gareiss
Two much loved Michigan natives and Wheatlanders have had key leadership roles in the project.  Nic Gareiss coordinated and served as the community liaison and Becky Hill, mentored by Sharon, produced a newly choreographed work.  Wheatland favorites Rodney Sutton  and Heidi (Kulas) Whitfield also have cameo appearances in the Saturday night performance.

The Carry it on… project is being supported by Wheatland Music Organization along with funding from the Michigan Council for Arts and Cultural Affairs (MCACA), The National Endowment for the Arts (NEA), the Country Dance and Song Society (CDSS) and by gifts by these 40th Anniversary family, business and organization sponsors:

Because 2013 was the 40th anniversary of the Wheatland Music festival and the 25th year of Traditional Arts Weekend, several activities were used to commemorate the year.  A new 40 year Anniversary Book called Passages II was produced along with a production called Carry it on… involving more than 50 Michigan youth and adults as well as many artists from past years. 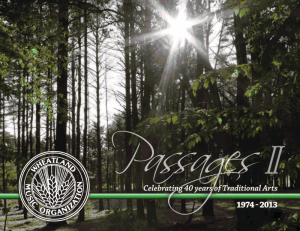 In celebration of Wheatland’s 40th anniversary, the book called Passages II was sold during the September 2013 festival.  The 80 page full color book includes memories, stories and photos collected over four decades.  Some of the photos included are those submitted by festival goers as well those taken by our professional photographers.  In all, more than 75 people contributed materials to the archives from which items were selected for the book.  Book sales helped support the costs of all special 40th Anniversary projects such as Carry it on…, planning for a proposed Acoustic Performance Venue and other physical improvements across the grounds. Though all copies were sold, at a future date, the book may be reprinted.