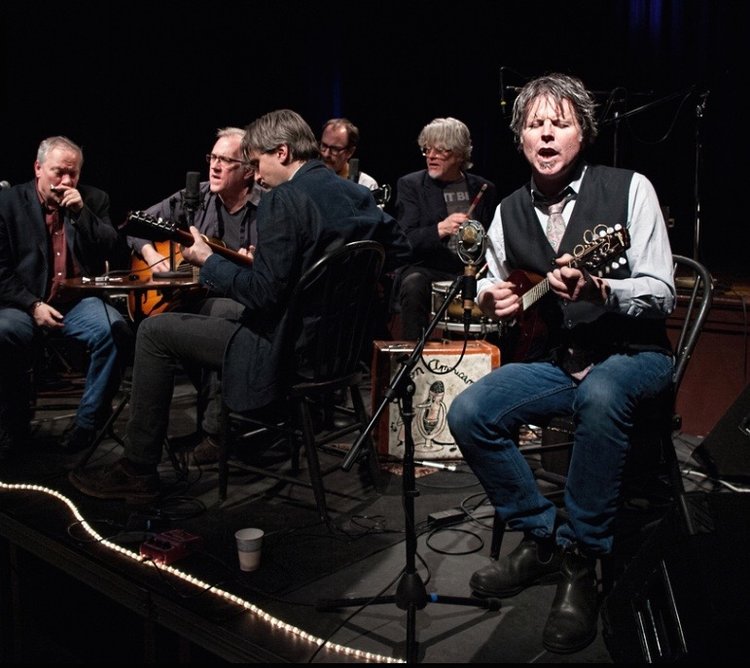 About the BandPraiseVideosFestival Schedule
Session Americana (Boston) is a rock band in a tea cup, or possibly a folk band in a whiskey bottle. This all-star band/collective of talented musicians craft a musical experience unlike any other. On stage is a collapsible bar table wired with microphones, a vintage suitcase recast as a kick drum, an old Estey field organ, a pre-war parlor guitar, a mandocello and all of its smaller siblings, a harmonica case fire damaged when Jack’s bar went up in flames and graffitied by Depeche Mode roadies, and an assortment of other instruments that get passed around in this freewheeling modern hootenanny. The anything-could-happen feel of a Session show depends on craft that’s not accidental or easily won; they bring a kind of ease and genuineness to this timeless music, sometimes presenting the latest batch of original songs, sometimes reaching back into depths of the American “song bag.”
It’s right there in the name for this ultra-gifted, rotating collective of singers and multi-instrumentalists. And sprawl is a good word when it comes to the Boston-based group’s raucous live shows, which were initially built around the community concept of traditional Irish seisiúns. The group, whose members have played with a variety of acts including Patty Griffin, Josh Ritter and the J. Geils Band, expertly blends vintage American roots music styles — from country to jazz to rock — in a rowdy but deft fashion.Rolling Stone
Session Americana are a rare breed, a collective of talented individuals that musically moves as one. They take their music seriously but never fail to find the joy in every note. One listen to Pack Up the Circus and I’m sure that you’ll agree.Twangville
The harmonies of the entire band and guests weaving into each other really build something powerful, fun, and it just feels HUGE. Jim Fitting’s harmonica defies logic…he just manages to play exactly the right parts at each and every turn. The guy just doesn’t play a bad note on that thing. And Billy Beard’s drum is the glue that really keeps everything in check. The host of characters playing everything from upright bass to the beautiful harmonies lended by artists like Anais Mitchell and Laura Cortese are sublime. This is a collective, a community…Session Americana isn’t just a band, its an experience.Redline Roots