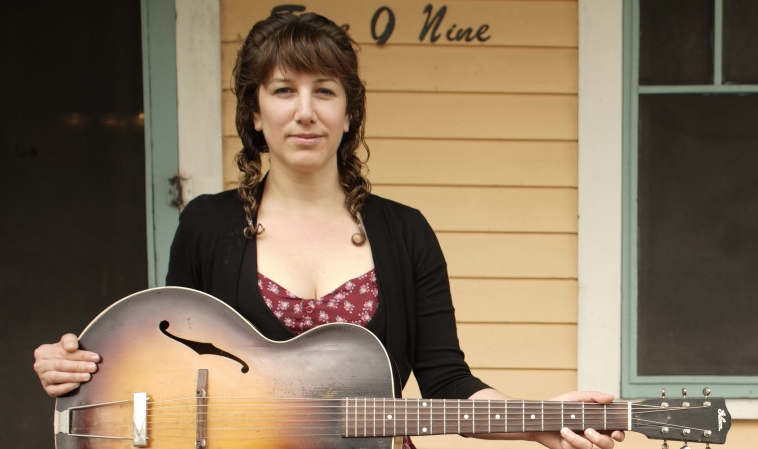 STAND UP BASS | Open to All Levels | Required Skills: None
Learn how to keep the beat with upright bass. Covering old-time/bluegrass/honky-tonk stylings.

OLD TIME BAND | Open to All Levels | Requirements: None
Form your own Old Time Band with guidance from members of our Old Time Staff!

Sabra Guzmán, recently transplanted to Lafayette LA, has been a resident of the Virginia hills since 2007, where she had become a fully entrenched member of the burgeoning old-time and country music scene of the Appalachians and beyond.  A founding member of the award winning old-time bands Old Sledge and Old Buck, Sabra is well known for her solid guitar and bass skills, her unique vocal stylings, and her captivating stage presence. She has been seen on stage at many prestigious venues and festivals – Freight and Salvage, Club Passim, The Los Angeles Old Time Social, The Ark, Floydfest, Bristol Rhythm and Roots – and received a coveted first place Traditional Old Time band at the Clifftop Appalachian Stringband Festival. Sabra brings a musicianship and her unique approach to all projects, regardless of genre or instrumentation.

First honing her musical chops in the musical era of the 1990’s post-punk era (Pixies, Violent Femmes, Minutemen, Palace), Guzmán was first drawn to the rawness and DIY stylings of old time music while living in Portland Oregon in 1999/2000, and the San Francisco Bay Area during the early and mid-2000’s, during the dawning days of both areas’ now fully-realized traditional music scene. Learning equally from her peers and from old recordings, she specialized in rhythm guitar and bass, working to develop a style that drives a band without overpowering the melody instruments. She takes her instrumental and vocal cues from Mother Maybelle Carter, Alice Gerrard, The Louvin Brothers and many others, and has spent time working on traditional ballad singing with Tracy Schwarz and Ginny Hawker.

While much of her time has been spent in the world of traditional and neo-traditional old time music (the Mercury Dimes, the Crooked Jades , the Flat Iron String Band, Old Sledge, Old Buck), Sabra is currently performing in the SW Louisiana area with her honky tonk band, Sabra & The Get Rights, or also on bass with the Cat Head Biscuit Boys, The Mad Minstrels with Cedric Watson, or The 20¢ Blues Band with Charles Vincent.