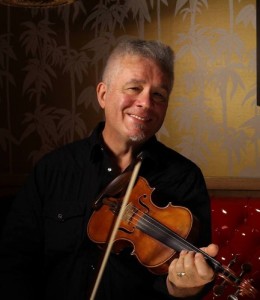 OLD TIME FIDDLE – INTERMEDIATE LEVEL
Required Skills: Participants should have a basic ability to play and tune their instrument.
Recommended Materials: Audio/video recording devices are strongly recommended.
Teaching will be slow and methodical with attention given to a good melody and bowing.

OLD TIME FIDDLE – ADVANCED LEVEL
Required Skills: An appropriate knowledge of the genre and ability to play tunes at a medium pace.
Recommended Materials:  Audio/video recording devices are strongly recommended.
The music will be learned by ear, with emphasis on listening and repetition. We will explore tunes and styles from Appalachia and the Deep South.

OLD TIME BAND | Open to All Levels | Requirements: None
Form your own Old Time Band with guidance from our Old Time Staff!

Rafe Stefanini is a world-renowned musician and luthier: an old-time banjo player, fiddler, guitarist, singer, teacher, violin maker, and restorer.
Stefanini has been at the forefront of the revival of traditional music from the rural south for over thirty years.

He has performed with the Wildcats (along with Carol Elizabeth Jones and Stefan Senders).  Along with Dirk Powell and Bruce Molsky he has performed with a trio called the L-7s. He has also performed with Bruce Molsky and guitarist Beverly Smith in a group called Big Hoedown, a group that disbanded in 2000.  Rafe is also a member of the Jumpsteady Boys, a band he formed with Bruce Molsky.  Along with Meredith McIntosh, John Hermann, and Bev Smith, he has performed in the Rockinghams.  He has also recorded with Bob Herring.  He performs with his wife Nikki and daughter Clelia (who plays fiddle, guitar, double bass, and ukulele) as “Nine Pound Hammer.”  Rafe and Clelia’s recent project with John Doyle, John Herrmann, and Eamon O’Leary, The Immigrant Band, released a new album in the summer of 2016.

He has recorded for the Rounder, County, Marimac, Heritage, Yodel-ay-hee, 5-String Productions, and World Music Network labels.
Stefanini has performed on A Prairie Home Companion, at the Grand Ole Opry, and at the Mount Airy Fiddlers Convention. He has performed throughout the United States as well as in Finland, Germany, Singapore, Thailand, Indonesia, Malaysia, and Brunei.