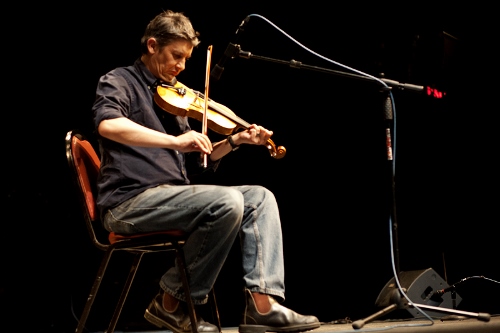 IRISH FIDDLE – INTERMEDIATE LEVEL
Required Skills: Participants should have a basic ability to play and tune their instrument.
Recommended Materials: Audio recording device (hand-held recorder, cell phone with recording app, etc.)
This class will focus on the basic technical aspects of playing traditional Irish music on the fiddle. These will include bowing/phrasing, left-hand and bow-hand ornamentations, tips on developing or improving tone and on how to practice more efficiently. I only teach by ear and strongly recommend students to bring some type of audio recording device. The emphasis of this class will be on listening and I will discuss the importance of simplicity and melodic integrity in interpretation of the music. I will also stress the importance of finding and learning good settings of tunes in developing repertoire and will present examples to illustrate the great variety of individual and regional styles in the music. The various tools acquired during the week will give students the ability to better differentiate various styles of playing and the confidence and skills to learn music more easily on their own.

IRISH FIDDLE – ADVANCED LEVEL | INSTRUCTOR: PATRICK OURCEAU
Required Skills: Appropriate knowledge of the genre and ability to play tunes at a medium pace.
Recommended Materials: Audio recording device (hand-held recorder, cell phone with recording app, etc.)
In this class, the focus will be more on repertoire. I will show students various settings of better-known tunes and more unfamiliar ones. Technical aspects such as bowing/phrasing, left-hand and bow-hand ornamentations and tone production will be covered as well. The emphasis of this class will be more on finding expression in the music, on exploring possibilities in variations in tunes while maintaining great melodic integrity rather than on speed and technical display. Listening will also be a focus of this class.

Fiddle player Patrick Ourceau has been playing Irish Music since his early teens. Born and raised in France, Patrick moved to the U.S. in 1989, settled in New York City where he lived for seventeen years, and is now based in Toronto, Canada.

Mostly self taught, Patrick’s taste for Clare and East Galway music developed early in his playing after being introduced to recordings of the legendary fiddle players Paddy Canny, Paddy Fahey and Bobby Casey. Patrick regularly visits Ireland and especially county Clare. Over the years, he has during those trips, been able to play with and learn from Paddy Canny, as well as from many other local musicians including flute and fiddle player Peadar O’Loughlin. During the many years he lived in New York, Patrick often played with such great musicians as fiddle players Andy McGann and Paddy Reynolds among many others, but was particularly influenced by the style and repertoire of Woodford, Co. Galway flute player Jack Coen.

He is a member since 2003 of the band Chulrua, along with accordion player Paddy O’Brien and guitarist and singer Pat Egan. The trio released last year, on Shanachie Records, The Singing Kettle, their first recording together. When not touring with the band, Patrick performs with guitarist Eamon O’Leary. In 2004, Patrick and Eamon Released Live at Mona’s, a live recording project praised by critics and fans alike as one of the best recent releases of Irish traditional music.

Since the mid nineties, Patrick has performed with many Irish and Irish American musicians and bands. Most notably in duets with Ennis, Co. Clare concertina player Gearoid O’hAllmhurain with whom he recorded Tracin‘ in 1999; with Tulla, Co. Clare accordion player Andrew McNamara, and with the legendary Tulla Ceili band, on the band’s last American tour.

In the last fifteen years, Patrick has been in great demand as a teacher and regularly teaches both privately and at various festivals and summer schools across North America and Ireland. He has been part, since 1999, of the teaching staff at Irish Arts Week in East Durham, New York and at Celtic College in Goderich, Canada. He has been teaching for the past several years at Friday Harbor Irish Music Camp in San Juan Island, Washington and at the Chris Langan Weekend in Toronto. Patrick taught several years at Augusta’s Irish Week in Elkins, West Virginia. He has also taught at the Alaska Fiddle Camp in Chugiak, Alaska; at the St. Louis Tionol in St. Louis, Missouri; at the East Coast Tionol in East Durham, New York; at the O’Flaherty’s Retreat in Dallas, Texas; at the Armagh Piper’s Club in County Armagh, Northern Ireland; and at the Fleadh Nua in Ennis, County Clare, Ireland.  patrickourceau.com

“He is a really marvellous fiddler, wonderful. He has such a deep knowledge of the music …  He really is extraordinary, how he deals with the sensitivity he has with the heart of a great tune”

“Patrick Ourceau is one of the finest fiddlers in the ranks of foreign-born musicians playing traditional Irish music.” Brendan Taaffee — Fiddler Magazine