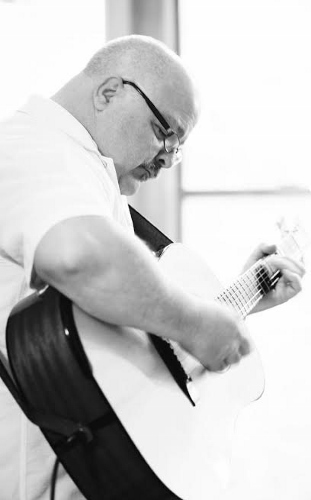 BLUEGRASS (FLATPICKING) GUITAR – INTERMEDIATE LEVEL
Required Skills: Ability to tune and use capos, pick out simple melodies, and play simple rhythm
Recommended Materials: Note-taking supplies, lists of questions, etc.
This class will revisit the fundamentals of playing Bluegrass guitar, focusing on the tools that allow us to grow at a general good pace, to gain understanding and confidence to be able to play with others including jams.  Importance of timing, scales, chord switching, hand positions, melody, rhythm, and single-note picking.

BLUEGRASS (FLATPICKING) GUITAR – ADVANCED LEVEL
Required Skills: Ability to play melodies at moderate speeds, and in two keys and/or two neck positions
Recommended Materials: Note-taking supplies, lists of questions, etc.
This class will focus on the importance of melody and timing, scales, chord shapes and position including introduction into the CAGED system.  Revisiting fundamentals and building tools that allow us to grow and gain understanding of the fretboard, and ultimately confidence.

BLUEGRASS BAND | Open to All Levels | Requirements: None
Form your own Bluegrass Band with guidance from our Bluegrass Staff!

Jim Hurst’s unique picking style and mastery of bluegrass guitar wows audiences and is revered by both novice guitar players and his musical peers.  His eclectic career has made him a remarkable performer, an experienced instructor and a highly sought after session musician.  His affability and gregariousness make him one of the most approachable musicians of his caliber.

The product of a musical family, Jim honed his musical style after being influenced by the likes of Chet Atkins, Jerry Reed, Clarence White, and Tony Rice.  He got national exposure with Holly Dunn’s Rio Band playing acoustic and electric guitar and also singing harmonies.  Several high profile television and radio appearances led to performing and recording with Sara Evans.

Itching to play more bluegrass, Jim joined the Grammy-nominated Clair Lynch and her Front Porch String Band in 1995 where he teamed up with kindred spirit bassist Missy Raines.  While with Claire Lynch, Missy and Jim formed a duet, creating ground-breaking arrangements.  They earned IBMA Guitar and Bass Player of the Year for 2001 and 2002.

Wanting to pursue greater artistic musical freedom, Jim left the Clair Lynch Band in 2010 to embark on a solo career.  With five solo works to his credit, Open Window, Second Son, A Box of Chocolates, Intrepid, and  Looking Glass, he added to this list producing a duet CD with Roberto Dalla Vecchia entitled Atlantic Crossing.  2016 saw the release of his new venture Jim Hurst Trio entitled JHT-1. Jim’s virtuosity shines as he consistently sways audiences with his deft finger work and smooth vocals.

Jim performs full time and teaches at guitar workshops and music camps in North America and Europe.  While he occasionally collaborates with other artists, his solo, duo, and trio performance are what keeps audiences mesmerized.