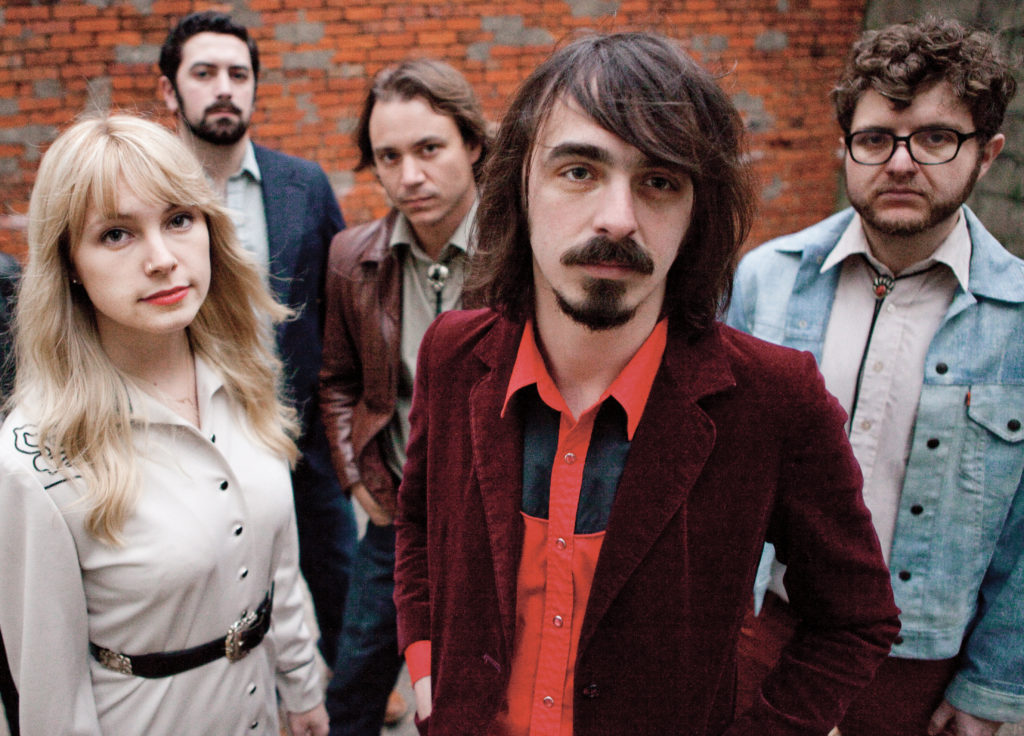 Feufollet is Americana at its finest— reverential but wholly nonconformists. The young and vibrant Southwest Louisiana band takes Cajun, honky-tonk, and string-band music as their starting point, and keeps an open mind about where their song craft will lead them. On Two Universes, their first studio album in over five years, Feufollet proves their Cajun roots don’t define them as much as propel them forward; whispers of the swamp and its time-honored waltzes trigger a modern and broad musical imagination, one that finds equal expression in blues, old-time, country ballads, rock’n’roll, whatever, all for the sake of the song.

Following the celebrated releases Cow Island Hop (2008) and En Couleurs (2010), Two Universes is the product of long-steeping recording sessions and collaborative songwriting between bandleader Chris Stafford and singer and multi-instrumentalist Kelli Jones, whose contributions make this a breakout album, of sorts.

Raised on Appalachian fiddle traditions, Kelli adds old-time stomp to the band’s repertoire. Also new to the band, keyboardist Andrew Toups lends a new-wave gospel sound owed to his background playing in rock bands. Toups’s influence on shaping the record, combined with Feufollet’s usual fare—twin fiddles, French accordion, guitar twang, and barn-dance rhythms— give the record more than a passing resemblance to the Band’s Music From the Big Pink.

But above all else, the album’s signature sound comes from the vocal performances. Flipping from husky honky-tonk angel to French chanteuse, Kelli’s voice perfectly pairs with Stafford’s swamp-pop vocal stylings. As the two trade off lead and harmony parts, they hit upon some of the same magic as history’s greatest duet partners—Emmylou Harris and Gram Parsons, Gillian Welch and Dave Rawlings, and Stevie Nicks and Lindsey Buckingham. Theirs is the sound of two universes colliding and, no surprise, it reaches maximum effect on the album’s title track.

Cajun, country, and rock’n’roll all began as homespun enterprises, by musicians tinkering with inherited melodies until new sounds were struck. Feufollet keeps that experimental spirit alive and well with their diverse musical palette, edgy arrangements, and pop-song sensibilities. On their 11-track release—exquisitely packaged with the psychedelic-folk art of Louisiana painter Francis Pavy—the band accomplishes the unusual feat of creating a sound that is at once familiar and fresh, classic and yet unmistakably original.

… this is their music and [it] reflects their lives. It doesn’t sound old or trapped in tradition, but alive and beautiful and vibrant. Kudos to Feufollet for bringing out such life in this music. No Depression
The band is downright radical in the studio. While it can still huff and stamp through a two-step, it reconfigures its sound for each song: adding backup vocal harmonies, assorted electric keyboards (not to mention a toy piano), horns or pedal steel guitar, as well as some electronic effects. The New York Times
These guys understand the songs — they understand the culture they came from… They’re not just playing songs. They’re not just imitating sounds. They’re retelling those stories new every time. They improvise, which means you actually have to make it part of you. These guys are fluent in the music and, at the same time, they’re fluent in the culture. They understand the words they’re singing. They understand where this comes from. They’re interested in creativity, but at the same time in continuity. They’re finding ways to do something new that’s still connected to what’s old.Barry Ancelet, University of Louisiana
I also love the album En Couleurs by a group called Feufollet… It’s one of the most beautifully melodic records I’ve heard all year. Elvis Costello