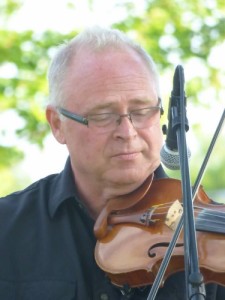 BLUEGRASS FIDDLE – ADVANCED LEVEL
Required Skills: Bowing patterns, some shifting, some knowledge of 1st, 2nd & 3rd positions, ability to play tunes at a medium pace.
Advanced bowing, theory, shifting, tunes, posture, what to do while playing with others

BLUEGRASS BAND CLASS | Open to All Levels | Requirements: None
Form your own Bluegrass Band with guidance from our Bluegrass Staff!

MINI-LESSONS: Dulcimer | Open to All Levels | Requirements: Bring your dulcimer!
Talk to Dan about arranging your own private dulcimer lessons!

If it has a string on it, he can play it…if you like the way he plays and you’d like to learn, he’ll teach you…if you’d like a custom built instrument to play, he’ll make one for you.

Daniel Seabolt is a consummate musician, instructor, and luthier all wrapped up in a bundle of boundless energy and enthusiasm who has been pleasing audiences in the United States and Europe for more than thirty years.

Starting at the age of 12, Daniel, “Danny”, began studying guitar and music theory with master guitarist John King.  At 14, he developed what would become a lifelong love affair with the violin.  He studied classical violin with the Westshore Symphony’s concert mistress, Jean Manning, and then played violin in the symphony.  His formal training completed, he made the move from violinist to fiddler and focused his attention on traditional bluegrass, irish, and jazz music.  As his exceptional talent became recognized, Dan had opportunities to open concerts for well-known performers like Riders in the sky, Doc Watson, Vasser Clements, Porter Wagoner, the Nitty Gritty Dirt Band, and Jeff Carson among others. He has done studio recording on albums/CD’s for numerous groups.  In addition, his music has been featured on a variety of radio and television advertisements.  His first love, however, is live performance with groups like The Oat Bran Boys, Free Wheelin’, and as featured fiddler for well-known singer/song writer,award winning,Ruth Bloomquist.  He has played for audiences around the United States, England, Belgium and France with Ruth, her husband Max, and John King.  His reputation in Europe has grown steadily as he has developed friendships, and performed, with a number of international musicians.

Danny is a natural teacher who attracts students of all ages and ability levels.  He provides excellent instruction on violin/fiddle, guitar, mandolin, ukulele. His patient and supportive approach to teaching music has won praise from students, parents, musicians and the general public.  In addition to private lessons, Danny also conducts three and five day music workshops in his home state of Michigan, and in the Lanquedoc region of southern France.

Complimenting his talent and skill as a musician, Danny is also an experienced and creative luthier.  His interest in creating instruments began when he learned the violin bow making trade. His bows have attained world-wide recognition, and are being played by professional musicians in many countries.  He subsequently discovered that he had a talent, and love, for designing and making custom violins, violas, mandolins and double bass’.  The demand for his uniquely styled, and beautiful sounding, instruments has grown steadily over the years.  He is a well respected master craftsman.

Creativity, exceptional talent, and unbridled enthusiasm have earned Danny a reputation that keeps him in demand wherever he goes.