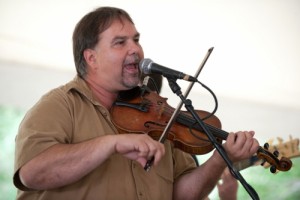 CAJUN FIDDLE – INTERMEDIATE LEVEL
Required Skills: Participants should have a basic ability to play and tune their instruments.
Using some basic tunes, learn the unique slides and syncopations that make Cajun music so recognizable.  We will also learn the basic Cajun seconding style.

CAJUN BAND | OPEN TO ALL LEVELS | REQUIRED SKILLS: NONE
Form your own Cajun Band with guidance from members of Bayou DeVille!

Bo Ledet is descended from French speaking parents who migrated from the “River Parishes” north west of New Orleans, to the “West Bank”, across the river from the Crescent City. Bo grew up playing whatever he could get his hands on- piano, guitar, anything available. Electric bass became his mainstay, and he played any music he heard: Swamp pop, rock, New Orleans R&B, country, you name it. But his dad always had a soft spot for his roots and played guitar and sang French music while they worked together in the family business.

Like many in his generation, Bo came to appreciate the music of his ancestors a little later in life, and the variety and wedding bands of his youth gave way to Cajun bands. He was part of the Cajun renaissance in New Orleans that began in the mid-eighties. He was full time with Don Douet for a time, a group Gina Forsyth also played in. Soon he was hired to record a CD with Vin Bruce, a legendary recording artist from Golden Meadow, Louisiana. Tony Thibodeaux, Blake Mouton, and Jr. Martin also did that CD, titled: Les Cadjins Du Bayou.

In the early 90’s, Bo began collaborating with Jonno Frishberg (fiddle) and Kermit Venable (vocals and accordion), both recently moved to New Orleans from the Lafayette area, and recorded a CD with them as the Beaubassin Cajun Dance Band. They were very busy for years in New Orleans playing traditional Cajun music. This led to Be being drafted into Charivari, a Lafayette based Cajun band on Rounder Records, with Frishberg on accordion and fiddle, Mitch Reed on fiddle, and Randy Vidrine on guitar and vocals. Charivari played and taught at Ashokan Fiddle and Dance for six years between 2000 and 2006, both for Southern Week and New Years almost every year. Bo was beginning to play fiddle more and more by then, and led many a late night jam on fiddle there. Bo recorded on Charivari’s “A trip to the Holiday Lounge” CD.

As Charivari was winding down post Katrina, Bayou Deville was gaining momentum in New Orleans, playing regularly at Mulates, as Charivari had done, but also Jazz Fest, French Quarter Fest and countless others over the last 10 years. Bo has often been the only fiddle or a twin fiddle in the band, as well as lead guitar, but currently plays bass most often. Bo played fiddle and guitar on the group’s only CD so far, “See Sharp and Be Natural”, released on the New Range Records label out of New Orleans.

Bo is a regular performer in Lee Benoit’s band as well, playing every week in New Orleans and doing overseas work as well with Lee on fiddle.