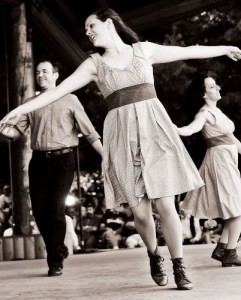 A SURVEY OF TRADITIONAL DANCE | Open to All Levels | Required Skills: None
Have you ever wanted to sample a few different traditional dance styles and figure out what works for you? Throughout the week, we will cover the basics of tap, waltz clog, Appalachian clogging and flatfooting, square dance calling, body percussion, Irish step dance, square dancing and basic partner dances. Show up ready to learn and have some fun, the class is open to all levels and ages. This class runs two hours a day and students can drop by for a day, the entire week, 30 minutes, or whatever works with their schedule.

Becky Hill grew up in Michigan and currently calls West Virginia home. She apprenticed with both Footworks Percussive Dance Ensemble and Rhythm in Shoes and has studied with an array of percussive dance luminaries such as Eileen Carson, Sharon Leahy, Sandy Silva and Ira Bernstein. She’s won flatfoot competitions at several festivals, including the Appalachian String Band Festival, and teaches at traditional music camps and festivals throughout Appalachia and the Midwest. Together with noted folklorist Gerry Milnes, she produced a documentary film on West Virginia dance traditions entitled “Reel ‘Em Boys, Reel ‘Em.”

In 2013, she was involved in Wheatland Music Organization’s Carry It On… Project where she was commissioned to choreograph two dance pieces under the mentorship of Sharon Leahy in honor of the festival’s 40th anniversary.During the summer of 2014, she traveled to India to study Hatha Yoga at Rishikesh Yog Peeth and returned home to teach at the Jivaka Wellness Center in Elkins, WV. In 2014 – 2016 she co-directed the Davis & Elkins College Appalachian Ensemble, a touring student performance ensemble made up of a string band and percussive dance group. In 2014 & 2016, she was awarded a West Virginia Division of Culture and History Professional Development Grant to further her study of percussive dance.

Becky currently works part-time as an Assistant Events Coordinator for Augusta Heritage Center where she organizes the Mountain Dance Trail. She is often seen performing with Good Foot Dance Company along Matthew Olwell and Emily Oleson.
She believes there is always more to learn and is dedicated to creating innovative choreography rooted in tradition. She hopes her work will bring people together and honor those that have inspired her.