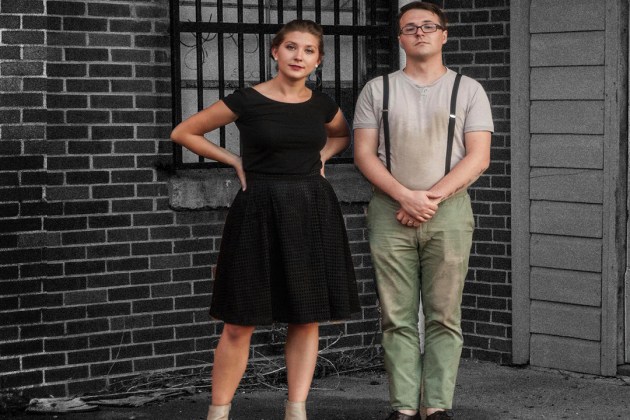 In a city filled with country cowboys and sit-on-a-stool songwriters, Adrian + Meredith make a different sort of roots racket. More Than A Little, the pair’s debut, finds the East Nashville-based duo putting its own spin on Americana music, roughing up the genre’s edges with the rule-breaking spirit of punk, the vintage twang of old-timey folk, the sneer of rock & roll, and even the frenetic bounce of early Swing and jazz manouche.

More Than A Little brings together two performers who grew up on opposite ends of the musical spectrum. Before meeting his future wife at a show in Washington, DC, Detroit-born Adrian was raised on rock and punk, with a carnival barker’s croon and an off-the-wall “clawhammer banjo” approach to playing the acoustic guitar. Meanwhile, Meredith was an Ann Arbor native who cut her teeth in the old-time music scene, where she played traditional fiddle and clogged. Those two approaches come together with Adrian + Meredith, a project that honors the traditions of Folk and Americana music while pushing beyond those genres’ boundaries. Produced in East Nashville by Mark Robertson, More Than A Little is being released in part via an innovative partnership with Daniel Lanois’ streaming company, UpRise.FM.

Adrian was already 10 years into an acclaimed solo career when Meredith made a guest appearance on his 2014 release, Roam. Since then, the pair’s partnership has grown into a full-time collaboration, with the two swapping harmonies, trading solos, and acting as co-pilots throughout their debut album. Returning from Adrian’s previous record is five-year bandmate Paul Niehaus on pedal steel, while JD Wilkes of the Legendary Shack Shakers and Fats Kaplin of Jack White’s touring band make guest appearances.

The result is a record influenced by the group’s time on tour, with songs that celebrate the joy of hitting the highway with your romantic partner (“Birthday Cakes,” “Old Midwestern Home”), and examine the darker corners of an entertainment industry that’s rarely, if ever, fair (“Bank,” “Fixer”). Equal parts defiant and driving, More Than A Little is a rallying cry from two road warriors who, after more than a dozen combined years in the music business, are too smart to play by the industry’s rules and too enthralled to turn their backs. It’s a love letter to a New Nashville and a call to arms for independent artists with true vision.