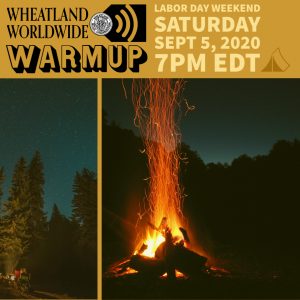 Wheatland Worldwide Warmup – campfire music for Labor Day Weekend –  was a fine introduction to the 2020 online festival held in 2020. The Warmup featured encore presentations of recent (and a classic) Wheatland performance, and sets the stage for Wheatland Worldwide – 3 days of NEW and HISTORICAL WHEATLAND performance – the following week.

The evening began by offering an encore performance of “Wish You Were Here… a Non-Traditional Arts Weekend” – that, like the 2020 fall Music Festival, had to be cancelled in 2020.

The Palooka Brothers start off the evening, followed by Rollie Tussing, The Family Business, and Creole du Nord. The concert will be emceed by everyone’s favorite announcer, Frank Youngman.

The Traditional Arts Weekend (TAW) replay was followed at 9:04pm by “Carry it on… a film by Sharon Leahy”. “Carry it on…” is a Dance for Camera film; created, performed and shot on site at the Wernette Farm outside of Remus, Michigan (Wheatland Music Festival‘s home for the past 40 years).

The film focuses on the power and potential of place and our sacred relationship to it. Moving through, with and around open fields, a pine grove and an old stage, the cast of dancers and musicians explores humankind’s relationship to the environment and our universal need to gather. “Carry it on…” will be followed by a short clip of the grand finale of the LIVE “Carry it On” concert video from the 2013 festival. (The full film will be played in it’s entirety on Sunday September 13th at 3:30pm. See schedule for full information.)

The Warmup evening concluded with an archival audio recording of the legendary John Hartford in his 1994 Wheatland appearance (featuring concert photos by Peggy Brisbane and Robert Barclay).